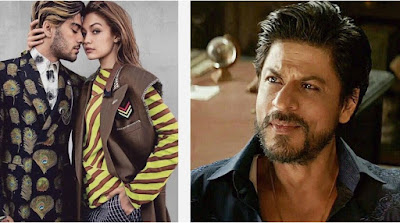 Shah Rukh Khan is certainly the Badshah of Bollywood, he rules over the hearts of his fans. The fandom of the superstar is such that people from International territories mostly know Bollywood by his name. The former One Direction singer Zayn Malik just revealed that he too is a big fan of Shah Rukh.

In a recent interview, fashion magazine Elle India, the Dusk Till dawn singer disclosed that he made Gigi, his girlfriend, watch Shah Rukh’s film. The Victoria’s Secret supermodel Gigi Hadid has been dating the actor since 2015. A winsome couple of Hollywood has been making us envy with them with the Instagram posts already. And now, this revelation is totally adorable.


Zayn said that being a huge admirer of the actor he also made Gigi Hadid watch his all-time favorite Shah Rukh Khan film, Devdas.


Zayn also confessed his love for Indian food and said that his mother makes the best Indian food around. Zayn Malik and Gigi Hadid are an amazing couple and no fan can ever miss out on any update about the ‘love birds.’ They have already taken over the Instagram with pictures posing for magazines and complimenting each other.
- February 02, 2018
Email ThisBlogThis!Share to TwitterShare to FacebookShare to Pinterest
Labels: Bollywood, Bollywood News, Bollywood Trends, ‪Devdas‬, ‪Elle‬, Film Industry, Hollywood, Instagram, ‪Jelena Noura "Gigi" Hadid‬, ‪One Direction‬‬, ‪Shah Rukh Khan‬, Zayn Malik‬